No less than thirteen artistic pedestrian crossings, made in DecoMark™, have been applied on the streets of London. It is part of what is called the ‘Piccadilly Art Takeover’ which is one of the initiatives in the ongoing ‘Let’s Do London’ tourism campaign.  This initiative comes as part of a is a unique partnership between the Royal Academy of Arts and Arts of London and is supported by Sky Arts, Piccadilly Lights, Westminster City Council and the Mayor of London. 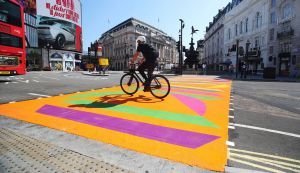 After a year that has taken its toll on tourism due to the pandemic and the consequent lockdowns, everything is beginning to open again. And how better to celebrate this than with a splash of colour and mood-boosting art on the streets?

In this spirit, the Royal Academy of Arts partnered with Art of London, in an artistic collaboration, in order to welcome people back to the UK capital by turning Piccadilly into an outdoor art gallery – or ‘gallery without walls’ as it is fittingly named. In addition to the colourful DecoMark crossings, there are artworks in the form of overhanging flags and videos on the screens known as the Piccadilly lights. All created by Royal Academy artists who were given the brief to create “original, bespoke and vibrant art”.

Geveko Markings  have been working on the project since September 2020, and are proud to see the work finally being visualised on the streets of London. It is the biggest number of crossings ever assembled in one spot in the UK, and Geveko believe it is a great showcase of how their markings are able to transform streets and urban spaces into colourful, creative environments for people to enjoy. 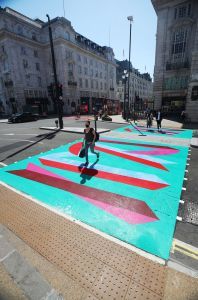 Geveko’s involvement in the project started when they were contacted by Futurecity via a contact of their that had recently had a colourful crossing installed in London.

FM Conway were the preferred contractor to install the colourful crossings and based on other recent crossings installed in London, Geveko’s preformed thermoplastic material, DecoMark, was specified for the project. This material is fast and easy to apply as the finished material comes in sheets ready to place on the road surface and apply with a heat torch. At the same time, it allows for intricate designs in a colourful palette – a range that Geveko supplied to the artist, responsible for the designs, so that she could create her art around the colours that were available.

The artist behind the markings It is renowned artist Vanessa Jackson, who is responsible for the design of the thirteen colourful crossings. Entitled ‘UpTownDancing’, the crossings bring her unique abstract and geometric style to the streets. And according to the artist herself, it should be seen as an invitation for everyone who cross the street to feel the rhythm created by the colours:

“In the crossings, which I’ve called ‘UpTownDancing,’ there’s an interaction in the colours and forms. I was trying to be a little bit electric and to keep it animated because I like to dance, and experience is an animated thing. I think this takeover will be great fun for everybody, and personally I’m looking forward to people not just walking across my pavements – like Abbey Road – but actually, I hope they’ll be dancing.”

Geveko markings are happy to have been able to help make these creative thoughts come alive in a project that brings colour to the streets and hopefully puts a smile on the faces of thousands of people who visit Piccadilly Circus every day.

Images credited to the Heart of London Business Alliance.