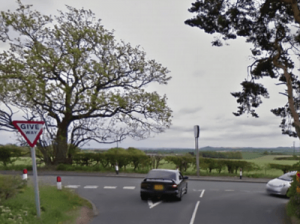 UK traffic safety specialist Westcotec teamed up with FLIR to build a unique collision avoidance system on a staggered junction near the city of Durham. The system, which includes FLIR TrafiOne thermal sensors, has helped change driver behavior and reduce the number of collisions to zero.

The staggered crossroad on the B6532 in Durham has proven to be a serious accident hotspot. Between 2012 and 2017 alone, one fatal, two serious, and six non-injury collisions have been reported. The Durham City Council decided to take action to prevent further incidents and called Westcotec for a reliable safety solution. “You might have cars that are coming on to the main road from the side roads at 10 to 20mph, while oncoming cars on the main road will do 60mph,” said Olly Samways, Head of Sales and Marketing at Westcotec. “Situations like these are dangerous and can have a big impact. Efficient signalization can warn motorists of the hazards ahead in time and help them to react safely.” After initial on-site consultation with the Durham CC Highways Team, Westcotec proposed to build a Collision Avoidance System using the latest above-ground thermal detection sensor, coupled with electronic warning signs. 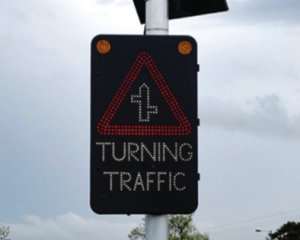 The staggered junction on the B6532 now features two electronic signs – one in each direction – with warning triangles, corner amber flashers and a message that reads, “TURNING TRAFFIC” beneath. The electronic signs warn motorists of the potential hazards at the crossroads, but only when vehicles on the side roads are waiting to cross or want to join the main road.

Two above-ground thermal detectors from FLIR detect vehicles waiting at the stop line on the side roads or vehicles waiting to turn right off the
main road. Upon detection, a signal is sent to the electronic signs, which puts the signalization in action. One thermal camera is able to cover the entire waiting area at the junction, resulting in only two cameras being required, overall.

The system has proven to be very effective. More than two years after the installation, not a single collision has been reported. 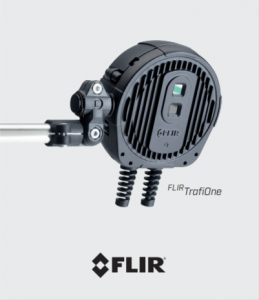 “Reliable vehicle detection is critical for the operation of the system,” said Samways. “We used to work with induction loops, but these systems are not very cost-efficient, unlike thermal cameras.” The main drawback of inductive loops is the disruption of the traffic during the installation and maintenance. Also, when a road surface needs to be
renewed, the loops are often destroyed along with it. Above-ground thermal cameras are the most maintenance-friendly alternative to inductive loop detectors. For the installation of thermal cameras, the road does not have to be dug up. The detectors can be installed on existing infrastructure, such as lighting poles.

In the case of Durham, the connection between the electronic signs and the thermal sensors is also wireless, which makes the installation even more maintenance-friendly. The signs work on solar power, which eliminated the need for a large amount of digging and ducting. “Thermal cameras have become our detection technology of choice,” said Samways. “We have been using FLIR thermal cameras for bicycle detection and for traffic signal control, but this is the first time in the UK that we have been using this technology for a collision avoidance system.” 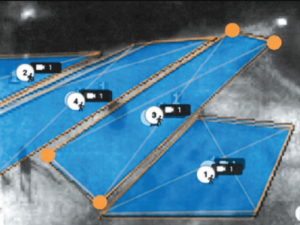 With the installation of FLIR TrafiOne sensors, it is also possible, via video analytics, to configure detection zones on the thermal video image so that when a vehicle enters a detection zone, the system is activated, sending a signal to the electronic warning sign. “One of the strengths of the system is that you can draw the zone anywhere
you want,” said Samways. “In this case, we were able to cover the entire region of interest with only one camera per side road, making it a very costeffective installation.”

The warning sign will only display when two conditions are met. First, the display’s integrated radar must detect oncoming vehicles on the main road. Second, the thermal sensors on the side roads must detect vehicles waiting to cross or enter the roadway.

However, the warning sign can also be programmed to respond to vehicles on the main road exceeding a set speed limit. Even if there are no vehicles waiting to cross, the system provides a timely warning to drivers on the main road, alerting them of potential hazards, should any waiting vehicles emerge. Operating only when vehicles approach from the side roads, rather than when a vehicle is detected on the main road, saves valuable solar energy and avoids needless operation when no oncoming vehicles are present. In addition, the dynamic nature of the installation also increases the visual impact of the warning sign.

“Warning signs are effective in enhancing driver awareness and impacting on their behavior in ways that reduce risk of collisions,” said Sukhdev Bhogal, Business Development Director at FLIR Systems. “However, traditional, continuously flashing warning signals have a reduced effect, because motorists do not receive a real stimulus to change driving behavior. This is not the case with detection-based warning signs, which can be activated based on the detected hazardous conditions.”