Opening of rebuilt vital A19 link is welcomed

Local residents and business owners have welcomed the reopening on Monday (21 June) of the A19 at Chapel Haddlesey.

Despite the complexity of the work and time lost in the aftermath of severe weather early this year, all the stops were pulled out to complete the rebuilding of the 1.5km stretch of road, which had been closed since storm damage in February 2020. 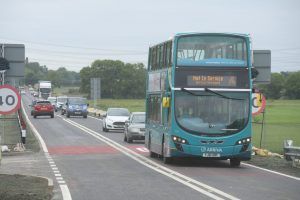 Image 1: Traffic on the reopened A19 at Chapel Haddlesey.

Among the first to drive the reopened road was Harry Campey, transport manager for Campeys of Selby, a fast-growing haulage business, which has grown from 20 vehicles and 25 staff five years ago to 85 vehicles and 110 staff today, and is on target to grow further by the end of the year.

Harry said: “We do general haulage up and down the country, delivering goods for Selby-based customers and this is one of the major roads we have always used.

“Two large customers of ours are located in Eggborough, which is the other side of the closure, so it has been a bit of an issue, but this is going to really reopen the town back up for tourism, trade and business.

“It is going to save us a lot of time, fuel and therefore CO2 emissions. It is going to connect Selby back up and open it up to everybody, because it has isolated certain areas of the local area.

“It was unlucky that the damage happened just before a global pandemic, which is why it has taken as long as it has. But hopefully it will be a long-term gain, with it now restructured, rebuilt and strengthened and should be hassle-free for many years to come.”

The road closed in February last year, when the River Aire spilled over its banks during Storm Dennis. The A19 at that point is built up because it crosses a flood plain. Strong winds pushed water in the flood plain across the road and against the embankment. That eroded the embankment, causing the carriageway to subside and crack.

Despite the size of the challenge and ongoing adverse weather, North Yorkshire County Council’s highways team inspected the site as quickly as possible and commissioned a design that would allow the contractor to begin reconstruction. The most significant issue was that the scale of the damage was unknown. Investigation and design were delayed by very slow dissipation of water, the availability of specialist equipment and the Covid-19 pandemic.

Reconstruction of the road involved 30,000 tonnes of rock armour, placed on the embankment shoulders to protect against flooding. In the layers beneath the new road surface is 12,361 tonnes of porous material that allows any floodwater to drain away, and above that another 10,514 tonnes of material that acts as a drainage layer.

James Malcolm, Highways Area Manager, said: “This has been a substantial piece of civil engineering, one of the most substantial in North Yorkshire. It is on a constrained site, where we had to dismantle and reconstruct the causeway and embankment on the same footprint. We’ve also had to deal with difficulties caused by severe weather and the impact of the pandemic.

“The end result is a legacy that is futureproofed for generations to come. The embankment and highway will serve local communities into future generations. It has inbuilt resilience that will enable it to recover from any flooding it may face.”

Vanessa Taperell, of Selby skip hire and waste removal business Taperell Environmental, another of those first along the reopened road, said: “The A19 is a crucial road. While it has been closed we have been having very long diversions. Reopening is going to have a big impact on our business, in fuel saving and time saving and a quicker service to customers, providing a faster turnaround, so it is really important it reopening again.”

Vanessa believes the reopening will also be beneficial for those wanting to shop locally, travel to work and socialise.

“For us, our children play for Whitley Bridge Cricket Club, which is based in Eggborough, so a normal five-minute journey to take them there has been taking 20 to 25 minutes.

“The A19 closure along with the Covid pandemic has made life quite difficult for some time, so the A19 reopening will be a real boost to the area.”

She and her family watched the steady progress on the reconstruction up to Christmas. She said: “After that we had more high water and after that it really kicked off, with people working weekends, so it has been good to see the progress.” 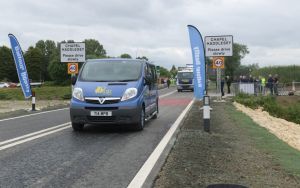 Image 2: Jane Burns of the Jug Inn is among the first to drive along the reopened stretch of road.

Jane Burns has been landlady of the Jug Inn at Chapel Haddlesey for just over four years and was another to drive the road as it opened.

“We are a country community pub, serving all the local villages around us, but Eggborough, Hensall, Whitley and that area haven’t been able to come without going a long way round, which has put them off coming here, particularly in the winter months,” she said.

She has also seen an impact on the small campsite at the pub and on such things as arranging deliveries, and on her regulars in having to use the diversion to commute or take children to school.

“It will be amazing to have the road open again,” she said. “It will open a whole new world to us. Customers will increase enormously from that area.”

Husband Mick added that he thought many people did not appreciate the scale of the job the council had to take on.

Cllr Don Mackenzie, Executive Member for Access, said: “We understand the impact of the A19’s closure on the lives of people in the area, so we did everything we could to rebuild and reopen it as quickly as possible.

“When storms earlier this year affected the construction schedule, we responded with additional investment that meant our contractor could work longer days and weekends as daylight hours lengthened. They not only clawed back the lost time, but enabled us to reopen the road five days ahead of our planned completion date.”

County Council chair Cllr Stuart Martin, who cut a ribbon to reopen the road, said: “I am delighted to be able to reopen this road ahead of schedule. I thank residents and businesses for their patience and am happy that we and our contractor have been able to provide a high-quality road that will serve them well long into the future.”

Stephen Semple, Area Director at Balfour Beatty, said: “Works have progressed at pace, overcoming the challenges of flooding and Covid-19, in a bid to reopen ahead of schedule; minimising disruption for the travelling public and local businesses wherever possible.

“We’re extremely pleased to have been involved in a scheme that will benefit the local community and once again, successfully deliver a complex logistical project for North Yorkshire County Council and their stakeholders.”

The majority of the funding for the £7.9m scheme came from the York & North Yorkshire Local Enterprise Partnership (LEP) through the Government’s Getting Building Fund.

David Dickson, Chair of the York & North Yorkshire Local Enterprise Partnership Infrastructure and Joint Assets Board, said: “It’s great news that this vital route is reopening and is better protected from flooding. Schemes like this create good economic growth for the region. The LEP allocated £6m from the Getting Building Fund to support the work and we’re delighted to see it reach completion.” Image 3: Children from Chapel Haddlesey Primary School sow wildflower seeds on the verge of the A19 shortly before the reopening.

Listeners to this week's Highways Voices will hear about the work being done by the Institute of Highway Engineers (IHE) to help develop training and skills in the sector.

CIHT announce the shortlist of organisations and projects for the 2022 Awards.

ITS (UK) invites members to the Los Angeles World Congress

The UK’s Intelligent Transport Systems industry association is working with partners from the transport technology industry to deliver a major presence for UK participants at the ITS World Congress in Los Angeles from 18-22 September.