Only a collaborative effort will help reduce the number of bridge strikes in the UK, says COEVAL MD It will take a collaborative effort from all those responsible for managing the road and rail networks as well as those who use them, to reduce the amount of bridge strikes that happen across the UK every year.

These are the thoughts of Richard Bevins, Managing Director of Coeval, who said continuing the search for solutions to help reduce the amount of strikes every year was vital to help increase levels of safety and awareness as well as reduce the amount of costs and delays.

“Our experience from regularly talking to local authorities, and other road and rail organisations is that despite all the good work that Network Rail, local authorities and other road organisations have put into raising awareness, as well as solutions that have been developed such as our Overhead Vehicle Detection (OVD) system, there sadly isn’t one answer to the problem. It will take a continued combined effort across the whole road and rail sector including by those who use the network, to get closer to solving this problem that puts road users and road workers at risk as well as costs totalling millions of pounds every year,” Mr Bevins said.

Bridges strikes not only place the people directly and indirectly involved in them at risk, they are also a costly problem. According to Network Rail, in 2019/20 there were 1720 bridge strikes that were reported a reduction of 11.3% from the previous year but still amounting to five every day. Of these strikes, 328 locations received multiple strikes and the most expensive single strike amounted to £1.8 million in train delay costs recently. Bridge strikes involving buses remain a concern for Network Rail with a steady increase over the last 10 years.

Most of the vehicles that hit railway bridges are Heavy Goods Vehicles (HGVs) as well as buses, at a cost of around £13,000 per strike –costing the UK taxpayer around £23m in a year, said Network Rail.

Network Rail research has shown 43% of lorry drivers admit to not measuring their vehicle before heading out on the road, and 52% admit to not taking low bridges into account. 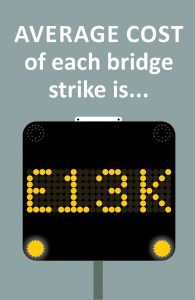 Coeval’s, Overhead Vehicle Detection (OVD) systems can alert drivers to a low bridge ahead and warn them that they are too tall to pass under it. It can also collect data in relation to the number of triggers and help to identify if there is a wider issue that needs investigating further.

The Bridge Strike Prevention Group (BSPG), part of the UK Network Management Board, seeks to influence the management of all bridges over roads in Great Britain so the risk of vehicular strikes is as low as reasonably practicable and the safety and reliability of both the road and rail networks is maintained.

Its Chair, Mark Wheel, Senior Engineer (Structures) & National Bridge Strike Champion at Network Rail said: “Network Rail remain committed to reducing the frequency of Bridge Strike events. We have yet to fully analyse the impact of Covid 19. However early indication shows that although numbers initially dropped, they are slowing creeping up again.”

Sir Peter Hendy CBE, chair of Network Rail, said: “We’ve had a number of encouraging, productive conversations with industry partners who are keen to work with us to offer improved support and education for drivers, and we will continue to engage with key players in the industry to reduce the risk of bridge strikes. But we also have to support action against vocational licence holders where they do not honour their obligations to operate safely”.