Highway Care’s FALCON Automated Cone Laying Machine (ACLM) is the first of its kind to successfully complete both off and on-road trials as part of Highways England’s Innovation project and is now endorsed for use on the strategic road network (SRN). 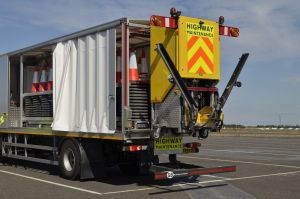 The FALCON ACLM started its on-road journey with Kier Area 9, with Kier also acting as the project management lead, before operating on the M4 through support from Balfour Beatty Vinci JV and Chevron Traffic Management, finally heading back to Area 9 where it completed its remaining testing.

• Successfully completed 220 km of live lane trials
• Over 50 solo-operator shifts completed, and total of 69 live lane closures
• Over 210t of cones handled during live-lane trials
• Average 176 cones per closure/shift, equating to approximately 3.18 Km per shift at a spacing of 18 metres
Overall FALCON ACLM total stats
• Over 57,000 cones deployed
• Over 756km of lane closed– proven durability
• Over 744t of cones deployed

• Significantly reduces exposure of operatives to dangers of working adjacent to live traffic and the future risks of musculoskeletal injuries
• Addresses the recognised industry shortage of skilled operatives for traffic management which is anticipated to become a significant challenge to industry over the next few years. Allowing the redeployment of staff to other duties to cover skills shortages in traffic management
• Saving of five tonnes worth of cone lifting by an operative per shift
• When additional equipment such as frames, signs, lamps, sandbags are factored in, operative lifting can total between eight and 10 tonnes per shift
• A single kilometre of coning takes approximately 15 minutes to install and remove, resulting in an exposure time to live traffic of approximately two hours per shift (data from Highways England)
• Ergonomics experts have struggled to identify a suitable method of placing and removing cones, that doesn’t have an impact on worker’s posture and general health due to the twisting of the body required and environmental conditions that the work is undertaken in. The FALCON ACLM eliminates the health and wellbeing issues associated with the repetitive task of cone laying

• The ACLM must be able to lay/collect at least 400 cones at a rate of one cone every 10 seconds
• Not only must the machines offer a safer method for highways workers, the ACLM must be safe for all road users and pose no further risk to traffic.

“The completion of the on-road performance and reliability testing is another significant step in the transition from manual cone laying to an automated process. The reduction in risk of injury to two crew members over that distance and with that volume of cones is the reason why this project is so important.

“To see the vehicle complete the testing against the minimum requirements is a proud moment for us all and allows Highway Care to move into a first production run. I look forward to seeing the first batch on the Highways England network later in the year.”

Tom Tideswell, Head of Innovation, Kier Highways, one of the partners in the project added:

“Over the last few months, the FALCON ACLM has been progressing to meet the reliability criteria of deployment/retrieval 24,000 cones without failure. It started in Kier Area 9 to capture performance in a maintenance arena. The FALCON ACLM was then trialled on the M4 Smart Motorway Project with Chevron and Balfour Beatty to test its capabilities for a typical major projects scheme. It then returned to Area 9 with Kier to conclude the cone count requirements.

“To facilitate this collaboration between all parties has been essential to ensure this key element of the Highways England Innovation Project is achieved. Training has been a particularly hard obstacle to overcome but was delivered efficiently and safely ensuring Covid precautions were always in place and adhered to. it is a true testament to what can be achieved when working together in our industry.”

“We’re immensely proud of what has been achieved over the last 12 months, and since the conception of the project over 2 years ago. We managed to put together a fantastic team of people who have enabled and supported this project, from start to finish, to achieve this hugely successful outcome.

To go from concept, to prototype, then into testing and finally achieve a successful review by Highways England’s NSCRG allowing the system to be deployed on the SRN, whilst overcoming various challenges, all during COVID, and within 24 months has been a massive effort. But one we have met head on with the clear objective to succeeding in improving safety for road workers for many years to come.

This success has been achieved through collaboration and so my thanks go to the project team, including key members from Highway Care, Senn Engineering, our technology partner, Tom Tideswell and his colleagues at Kier Highways, Martin Bolt and his colleagues from Highways England’s Innovation and Health and Safety teams, and finally Chris Fordham and colleagues from TRL. Their time, dedication and commitment throughout the project has been vital.

I would also like to thank the support received from key stakeholder’s Balfour Beatty Vinci and Chevron Traffic Management JV, and Kier Highways Area 9, for enthusiastically supporting the on-road trials and ensuring they were a success. The coming together of all these businesses, and their key representatives, demonstrated their capability of the industry to overcome challenges through collaboration.” 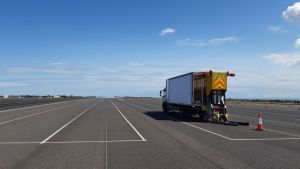