Amberon have always been eager to assist the local communities that surround our 28 depots, we have been working hard to further involve ourselves in local communities, aiding and assisting local projects, people and activities by using our assets and capabilities in order to add value.

Last year we pledged to increase our efforts by developing our Amberon Community Engagement Programme (ACEP19) and so far, have focused on improving lives for children in our communities.

We are always so pleased to help out across these projects and we have many more planned in the pipeline.

For all the people involved and for the rest of the Amberon work force we all know how important our local communities are and as we branch out into our depots and beyond, we feel the Amberon community family continues to grow and provides us with the opportunity to help and assist more people.

Below you can see various examples of what we have already achieved as a company across the country: The children in Ysgol Dolgarrog contacted Amberon to tell us that they had carried out a traffic survey outside of the school and were concerned about the number of vehicles to be breaking the speed limit within the 30mph zone. Without being able to deter or stop this ourselves, our Business Development Manager for the North, Geraint Jones went to visit the school and undertook a short course to hopefully educate the children with a safety presentation and an interactive safety quiz.

On completion we were so glad to hear that teacher, Morgan Dafydd said that the children found the talk very engaging and informative. Road safety is very important especially when temporary road works are in place therefore, Amberon look to give these talks as often as possible throughout our coverage areas. 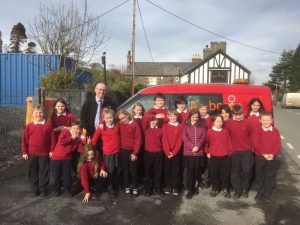 Amberon were delighted when Astwood Bank Primary School contacted us to see if we could help support the “Drop ‘n’ Go” safety project and of course we were very happy to not only get involved but to donate and help implement the safety zone that AB Safety had been trying to launch.

Amberon’s Droitwich depot gave immediate contribution by creating signage and providing cones for the schools’ new safety zone. As a team the new “Drop ‘n’ Go” Zone was successfully achieved and since the project has been up and running the children and parents feel a lot safer in the knowledge AB Safety and Amberon are taking road safety seriously. Amberon were approached via email by a teacher at Milton primary stating how they were in need of new rugby kit and equipment due to theirs being severely damaged and outdated. We at Amberon were very overwhelmed when we found out that Milton Primary School had not had a new rugby kit for almost 10 years. With Milton Primary being in Wales an environment that highly promotes the growth of its rugby culture we knew we had to step in.

Amberon got involved via an engagement project, this involved an amazing concept where we proposed that the school children should design their own kits and provide us with the final version ready for production. We communicated with the school and have now had the kit made for them as well as providing them with basic kit to enhance training sessions.

The Big Build is the BBC’s flagship home renovation programme; it has been running for 18 years and attracts up to 5 million viewers per episode in its prime-time slot on BBC One.

The award-winning show, presented by Nick Knowles and his team of Billy, Mark, Chris and Jules, takes on extremely Big Builds across the country in just nine days.
Amberon have supported local communities four times by providing DIY SOS with Traffic Management while they carry out their magic on projects across the UK. Projects in Bolton, Bromsgrove, Plymouth and the Grenfell Tower boxing club have all been on the Amberon radar.

Below you will see some of the Amberon team with the exceptional DIY SOS team, we will continue to support the work that they do and give assistance with our Traffic Management in the future. The Amberon team were contacted by a local charity, Porthcawl Buccaneers who distressed they had been let down by a supplier who was to aid their annual Christmas swim which has been on going for 54 years with 50 cones. Amberons local depot Swansea jumped straight on it and provided Porthcawl Buccaneers with the cones they needed at no charge.

Amberon and the Swansea depot were honoured when Swansea depot manager Dafydd was subsequently asked to attend their annual presentation. They raised around £25k between the swim event and a yearly carnival and all proceeds went to Prostate Cymru and local charities such as St Johns Ambulance, RNLI and Welsh Fire Services for their support in helping the event year on year. Up to date advice and information from Leading Bodies, DfT, Government and LCRIG Members.

Working safely during COVID-19 in construction and other outdoor work

Covid-19 Road and Street Works Bulletin 006: charges and Permits cancelled revoked or shut down due to Covid-19