Status Works were completed during one phase, over a 3 day period

Project requirement Miles Macadam were recently appointed to resurface Blue Boar Row in Salisbury, Wiltshire. We were tasked with undertaking the works as part of Wiltshire Council’s annual resurfacing programme where it was identified as a road under heavy strain and had begun to show signs of deterioration. Blue Boar Row is part of Salisbury high street, mirrored either side with historic buildings and natural stone pavements. Miles Macadam resurfaced Endless Street in 2018 which adjoins Blue Boar Row. It was in a similar condition prior to resurfacing and there was concern that the road would continue to deteriorate considering the high volume of bus traffic.

Services supplied Miles Macadam is a market leader in the manufacture and installation of Grouted Macadam Systems which resulted in 1,155m2 of Miles Macadam’s own BBA certified cementitious Grouted Macadam Hardipave™ being specified for the project. Hardipave™ consists of a design mix open graded receiving course with a controlled void content, which is reinforced with a resin cementitious grout. A major benefit of this product is a short curing period, allowing fast track installation and re-opening of the surface for public use with minimal inconvenience. A typical failing of carriageways utilised by regular bus traffic is deformation and rutting of the surface course. The continual vibrations from stationary buses often cause conventional materials to weaken and deform. As a high street, Blue Boar Row has intense traffic loadings from all types of vehicles including cars, buses, and lorries. As a response, Hardipave™ was specified as it is designed and proven to withstand intense traffic loadings and fuel/leachate contamination and provide a long-term durable solution for the project.

Outcomes The activity took 4 days to complete and mainly consisted of nightwork to reduce disruption to the busy high street and local businesses. The programme consisted of planing 40mm of concrete from the previous surface followed by the 40mm binder course. A 24-hour road closure was implemented for the installation of the Hardipave™ surface course, however this was completed on a Sunday to reduce disruption. Road Marking and Gully Cleaning was then completed on the Monday night and the road reopened to the public on Tuesday morning. 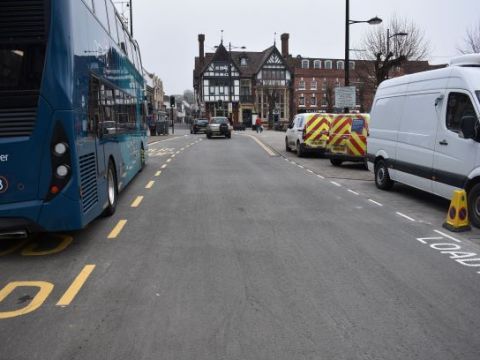